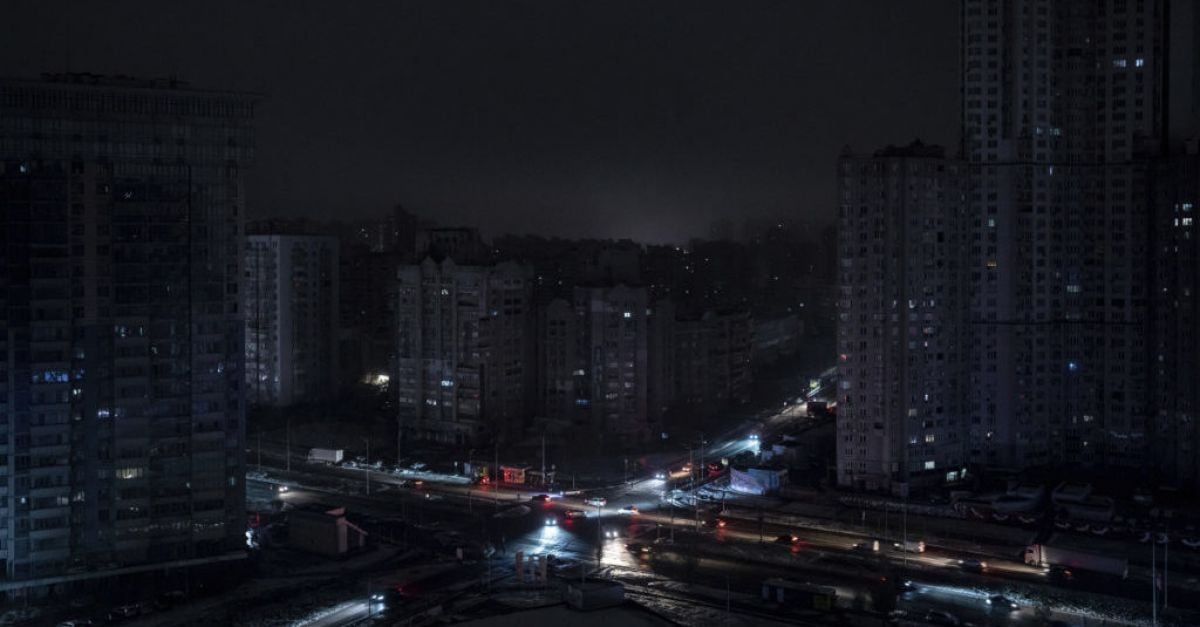 Multiple regions reported attacks in quick succession and Ukraine’s Energy Ministry said that “the vast majority of electricity consumers were cut off”.

Russia has been pounding the power grid and other facilities with missiles and exploding drones for weeks, damaging the energy system faster than it can be repaired.

Ukrainian president Volodymyr Zelenskiy tweeted after Wednesday’s strikes that he has instructed Ukraine’s ambassador to the United Nations to request an urgent Security Council meeting.

“Murder of civilians, ruining of civilian infrastructure are acts of terror. Ukraine keeps demanding a resolute response of international community to these crimes,” Mr Zelenskiy said.

Russia’s deputy UN ambassador, Dmitry Polyansky, said on Telegram that such a meeting has been called for 4pm local time, or 9pm GMT.

Before the latest barrage, Mr Zelenskiy had said that Russian strikes had damaged around half the energy infrastructure.

Rolling power outages have become the horrid new normal for millions – and the latest barrage affected water supplies too.

Ukrainian officials believe Russian president, Vladimir Putin, is hoping that the misery of unheated and unlit homes in the cold and dark of winter will turn public opinion against a continuation of the war – but say it is instead strengthening Ukrainian resolve.

Kyiv mayor, Vitali Klitschko, said on Wednesday that “one of the capital’s infrastructure facilities has been hit” and there were “several more explosions in different districts” of the city. He said water supplies were knocked out in all of Kyiv.

Kyiv resident Oleksii Kolpachov told the Associated Press that he heard an explosion as he was going up an escalator out of the subway.

“Then the electricity suddenly disappeared. When I got out of the subway, there was a column of smoke,” Kolpachov said.

UN deputy spokesman Farhan Haq said UN humanitarian officials in Ukraine report that “right now, there are power outages in every region of Ukraine” and some regions including Lviv in the west, Zaporizhzhia and Odesa in the south, Vinnytsya and Dnipro in the centre have been completely disconnected from electricity while Kyiv has been left without electricity in most areas and without water across the entire city.

In Moldova, infrastructure minister Andrei Spinu said that “we have massive power outages across the country,” whose Soviet-era energy systems remain interconnected with Ukraine.

It was Moldova’s second outage this month. Pro-Western president Maia Sandu charged that “Russia left Moldova in the dark”.

She said the future of Moldova, a country of about 2.6 million, “must remain toward the free world”.

Moldova’s foreign minister said the Russian ambassador was being summoned to give explanations.

It said they would resume supplying electricity as soon as the grid is “normalised”.

Energoatom said on its Telegram channel that radiation levels at the sites are unchanged and “all indicators are normal.”

The Energy Ministry said the attacks also caused a temporary blackout of most thermal and hydroelectric power plants, and also affected transmission facilities.

Staff were working to restore supply, “but given the extent of the damage, we will need time,” it said on Facebook.

Ukraine’s air force said Russia launched about 70 cruise missiles on Wednesday and 51 were shot down, as were five exploding drones.

Wednesday’s blackouts also caused “the largest internet outage in Ukraine in months and the first to affect neighbouring Moldova, which has since partially recovered”, said Doug Madory, director of internet analysis at network-monitoring Kentik Inc.